Hackference is Hackathon + Conference if you haven’t noticed it yet. The event was being hosted at Kstart Capital, Whitefield, Bengaluru (almost an hour from where we were staying,  Amrita Bengaluru campus. )

The DevRelConf (short for Developer Relations Conference) shortly began afterwards, and it featured some excellent talks and discussions. The whole deal was an absolute delight to attend.

All of the talks were perfectly aligned, with each building on the previous one – you’ll see what I am talking about.

The conference began with Julia Aslamova with “The Power of Developer Community”. Julia’s talk was led by real life examples of individuals and how communities had helped them grow, including her own brother. Julia’s and her brother’s story were nothing short of inspiring,from growing in a small Russian village to where they were now – all with the help of communites.

The second talk was from Karan M V, from Digital Ocean on “Building strategies around developer communities”. He shared some insightful strategies about building communities from scratch.

The final talk before parting for lunch was given by Subhendu , CEO of Skillenza on the “UX of Developer Experience ” . He talked about the many factors that go into play while taking account of how developers interact with the interaction medium.

Now comes the part that I loved the most in the Conf and it was not the lunch surprisingly, it was the panel discussion compromising of all the 4 speakers. With Paras, the host, the panel held up some really interesting discussions on the State of Developer Communities in India. Karthik described the problem of herd mentality in most of the people in software today and how we are lacking innovation due to the same. He also mentioned the importance of holding on to the fundamentals in times like these and not just blindly chase the trends. Rabimba, tech speaker from Mozilla advised to never hesitate to do what you like to do, e.g : a personal project – all in all a very lively, lovely discussion.

After lunch, the afternoon session ensued with talks about Block chain and WebVR but due to time constraints, most of the talks were squeezed and with that, the DevlRelConf came to an end.

My team of Venu ettan, me and Aswin – Team deadlock – started immediately working on our idea, GitLit, after some running around to get some free space in the assigned work area. GitLit is basically a social platform for developers, to find the right project based on their skills and interest and for communities, to find capable and interested contributors and even to connect developers of same interest and skills. The major motivation behind the idea was something almost all of us have faced  :

To find projects and to contribute something worthy to a project has always been a challenge for a first timer. Through GitLit we seek to make it simple for everyone.

We were able to complete the metrics for rating repos and users and we got the required scores of a user and a repo on terminal but intergrating it with Django was another huge task which we weren’t able to complete in the 20hr time frame.

The midnight snack was love tho :3 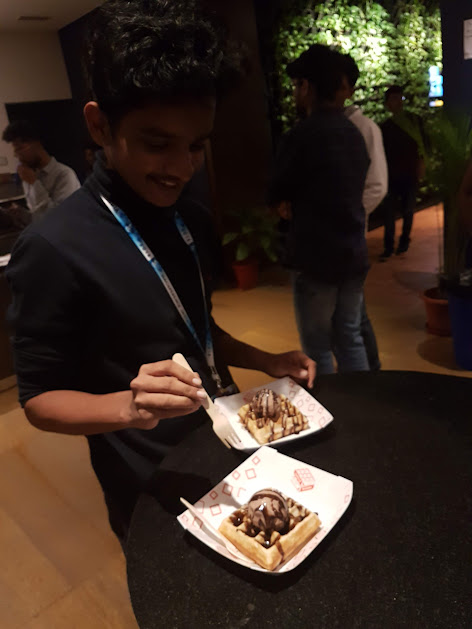 We had many rounds of judging, where judges came and asked us about our project and all of them were impressed with the idea, and one judge who was from GMetri  liked it so much that he called us for interviewing for internship at their company – despite the fact that the Hiring Fair application deadline had passed and none of us had applied for any of the posts they offered.

We didn’t ‘win’ anything but we were certainly able to win the hearts of the people 😀 We tested the rating, and we used inputs of usernames of the judges and they were amazed with their scores 😀

All in all – an unforgettable experience.

You can find the code and documentation of GitLit on GitHub.